Along with his wonderful abilities as a writer and scholar, Stetson possesses enormous courage, social involvement, and a big heart. . . . His Scholarship is not held back by rules; it flows wuth lyricism and a complete savvy of whatever he's into. He's a brave man, of great conscience, and ought to be accorded a seat alongside Patrick Henry and other great freedom fighters.Alan Lomax, Association for Cultural Equity

Throws a clear light on events of the post-Civil War era as they relate to current divisions of class and race in contemporary society. Kennedy's interpretation runs against that of many other scholars, but certainly it is well supported and coherent and has the added force of strong argument. Patricia Waterman, University of South Florida

Stetson Kennedy may well go down as the first investigative historian. William R. Jones, Professor of religion and director of the Black Studies Program, FSU

All during the freedom marching of the 1960s my cohorts and I took our text from Stetson Kennedy's impassioned writing against Jim Crow racism. James N. Eaton, Director and Curator, Black Archives Research Center and Museum, FAMU

After Appomattox :
How the South Won the War 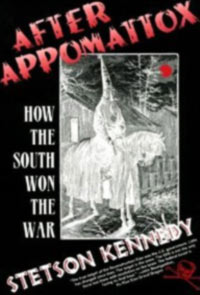 Kennedy's premise-argued and documented here as never before-is that the verdict of Appomattox was largely reversed during Reconstruction. A determined southern oligarchy, he says, wrenched political and cultural victory out of military defeat. In this dramatic contribution to the history of Reconstruction, Kennedy brings to light thirty-three long-buried testimonials from victims and perpetrators of Ku Klux Klan terror that were taken by a Joint Congressional Committee in 1871-72. They form the core of this account of the decade following the Civil War, which Kennedy describes as a period of “holocaust, demagoguery, chicanery, fraud, and psychological warfare that culminated in the Deal of 1876.

That “deal”, struck between Democrats and Republicans in a smoke-filled room of the Wormsley Hotel in Washington, D.C., essentially revoked the unconditional surrender of the South at Appomattox. It gave Republican Rutherford B. Hayes the victory in the disputed presidential election of 1876 in return for the withdrawal of federal troops from the southern states, and Kennedy contends that it diluted the power of the hard-won 14th and 15th Amendments and led to the imposition of the Jim Crow system after Reconstruction.

Work on After Appomattox began with Kennedy's discovery of the thirteen volumes of Congressional testimony in the Schomburg Center for Research in Black Culture in the New York Public Library. The interviews are chilling, heartbreaking, and plain-spoken describe how the black and white targets of the Klan terror chose not to arm themselves or bond together for protection, counterattack, or counter terrorism. They simply stood as individuals against their tormentors, and, for refusing to renounce their rights, were often killed. Citing the testimony of one former slave, undeterred from voting by a near-fatal flogging, he quotes, “I can be strong in a good cause.”