Ninety Was a Very Good Year! 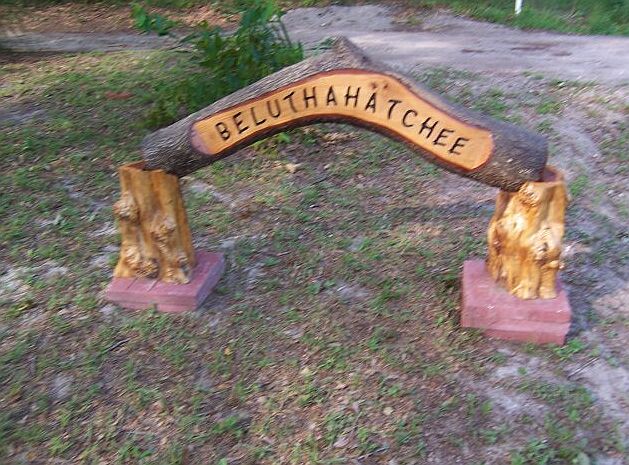 Personal Milestones
Great progress has been made during the year in converting the residence of Stetson and his late wife Joyce into an “as is” museum,  literary landmark, and Florida Heritage  park. Beluthahatchee Park is a joint county/state one, as part of the “Florida Forever” network of sites focused upon preservation of native vegetation. The dam with which Stetson created Beluthahatchee Lake was blown out by hurricane Frances, but has  been restored  through a $400,000 tax bond  secured  by the  lakeside residents. A new deck has been completed by St. Johns County  and restoration of the original cedar shake roof will soon get under way, both thanks to the donation of materials by Lindal  Cedar Homes. The adjoining property with a bi-octagonal structure has been acquired by county/state and added to the Park.   Stetson, Sandra, and volunteers Karen Roumillat, Todd Johnson, and Jill  Bowen  have worked throughout  the year installing  Stetson’s library in the new structure, which will also house a satellite office of the St. Johns County naturalist Beverley Fleming,   and the  SK Foundation. The facility will be a venue for workshops for public and  private  agencies in  northeast Florida.   A ribbon-cutting is hoped for by this coming summer.

Big year for honors.
Stetson received a special award from the St. Johns County Vision committee for his lifetime achievements on behalf of  human  rights and the environment..

At the Oral History Association annual conference in Little Rock,  he gave a presentation and was feted with a reception to honor his birthday and his WPA pioneering  in oral history. His picture is featured on the cover of the current Oral History Review, along with an appreciation for his lifetime contributions to the field of oral history.

Stetson’s photograph and an account of his Klan-busting was included in The Enemy Within, the traveling United States Spy Museum exhibit on terrorism in America. At the exhibit’s showing at the Exploris Museum in Raleigh Stetson gave a lecture on his experience in infiltrating the Klan and other terrorist groups in the US.

Old Friends
Stetson and Sandra celebrated reunions with two old friends- Studs Terkel and Pete Seeger. Studs’s 95th birthday was celebrated at the Museum of Chicago History. The Seeger family was honored at a two-day seminar at the Library of Congress in Washington DC.

On the lighter side, Stetson and Sandra drove to Palatka to hear Florida folk balladeer Frank Thomas sing his “Ballad of Stetson Kennedy”  at a gathering sponsored by the Palatka Arts Council.

We traveled to New Orleans to help Stetson’s WPA colleague Charles Foster close his home and move to Washington state. In the wake of Katrina, Foster, who is also in his nineties, gathered up a lifetime of artwork and photographs.  Foster is one of the few surviving veterans of both the WPA Art Project and the CCC.

Activism
In Montgomery Stetson and Sandra attended the ceremony commemorating the fiftieth anniversary of the conclusion of the Montgomery bus boycott . We met with director Morris Dees  and the staff of the Southern Poverty Law Center that monitors hate groups and seeks legal remedy for acts of terrorism.

The very last day of Stetson’s 9lst year was spent at UNF, as one of seven prominent area activists  in a “Council of Elders”—Peg McIntyre, Henri Landwirth, Jim Lennihan,  Robert Ragland --as part of “Peace Awareness Week.”

Stetson was interviewed for two one-hour TV programs at Brevard Community College in Titusville. One broadcast focused on Stetson’s folk heritage work; the other on Stetson’s friend Harry T Moore, the president of the Florida NAACP, whose murder in 1951 has still not been solved. Stetson is working with Rosalie Foster, president of the North Brevard Heritage Foundation to reproduce Stetson’s extensive files for the Moore Center in Mims and for the historical society.

Stetson traveled to Tallahassee to support St. Johns County’s grant application for the preservation of the Switzerland fire station as a community center.

Stetson participated on a panel at North Florida Community College in Nassau County to discuss a Jacksonville lynching that was thwarted by Napoleon Bonaparte Broward, whose descendent architect Robert Broward was also on the panel. The key speaker Dr. Margaret Vandiver presented a media presentation on her book on that topic.

Literary projects.    Pineapple Press of Sarasota has contracted to publish Stetson’s collection of Key West folklore, “Grits & Grunts,”  which he started in l935. Pineapple Press also plans to  reprint hard and  paperback editions of Stetson’s first book, “Palmetto Country,” this time with abundant photographs of “the Florida that was” before WW II.  Stetson and Sandra have been combing the state for photos for both books:  the state archive in Tallahassee, Florida Collection at the P. K. Yonge Library at the University of Florida,The Historical Museum of South Florida in Miami, the Key West Historical Museum, and the Monroe County library.

While  he was in Key West, the local journal “Solares Hill” published a feature article about his forthcoming Keys book.

Also during the year Stetson continued to work on his memoirs, to be titled “Dissident-at-Large.” Lou Salome, long-time international correspondent for the Palm Beach Post, has been taping extensive interviews with Stetson for this project.

Prospects for a Hollywood film based on Stetson’s exploits took a dramatic upturn on the eve of his 9lst birthday party, with   the gift of a premium bottle of champagne from one of Hollywood’s top actors and  a prominent  script writer, with a note that much  more would be forthcoming at a grand opening.

On the side, Greendoor Productions of Hollywood, Florida, came by and shot hours of footage for a documentary which they plan to submit to Robert Redford’s Sundance Film
Festival.  and Nancy Dorr did a segment on Stetson for her documentary historyof the Klan, which she intends to submit to the Cannes Festival next year.

Spark Media of Washington, D.C..  continued to develp film footage of Kennedy for its projected “Voices from the Writers Project, featuring such others as Studs Terkel and Richard Wright..

Stetson conducted an afternoon of conversation about Florida writing at Bellamy House in Melrose. Friend Al Burt was unable to attend due to an injury, but Stetson went right on!

The Winter issue of the UF alumni magazine  featured a profile of Stetson and his Klan-busting activities., written by editor Steve Orlando.

Friday evening, October 5th, 2007 Stetson Kennedy’s family and friends gathered at Anastasia Books in St. Augustine to celebrate his 91st birthday. Kennedy and his wife, Sandra Parks, welcomed friends from around the state, and family from across the country, including representatives from the Harry T. Moore Center and several public officials from St. Johns County.

As part of the birthday festivities, which coincided with the St. Augustine Art Walk, Kennedy and Parks hosted Bridges Across Borders, a nonprofit organization that works in the US, Southeast Asia, and Latin America to address the causes of poverty and violence. Representatives from the organization sold crafts made by indigenous peoples in Central America and the artwork of Ana Maria Vasquez, a folk artist and longtime friend of Kennedy’s who coordinates Bridges Across Borders’ program in the Darien rainforest on the border of Colombia and Panama.

A display featuring photos from Kennedy’s book, Palmetto Country, offered guests a glimpse of the rich Florida history and folklife that Kennedy has dedicated much of his life to collecting and preserving, most recently in his forthcoming book from Pineapple Press on Key West.
African drummer (name unkown, if you know his name please email us), played as Kennedy danced, and guests enjoyed recounting stories of the memories they have shared with Stetson over the years. The large collection of family and friends served as a powerful testament to the legacy Kennedy has created during his 91 years and his continued efforts to preserve folklife and work for social justice.