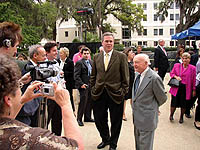 "He's a remarkable writer and researcher," Hood said. "He used his art for the betterment of mankind and to aid the fight against racism."

Kennedy, a resident of Lake Beluthahatchee in Northwest St. Johns County, received a trophy and accolades at an outdoor reception across from the Capitol building that drew several hundred artists, historians, friends and admirers. Gov. Jeb Bush and Lt. Gov. Toni Jennings stopped by to congratulate Kennedy.

On the floor of the Senate today, state Sen. Tony Hill of Jacksonville will read a proclamation honoring Kennedy.

The man of the hour shook hands, posed for photographs, then thanked Bush and Hood for approving his nomination to the Artists Hall of Fame.

He said, "My wife, Joyce Ann, passed away two years ago. I wish she could be here tonight. This has been a long time getting here, but whatever I did along the way wasn't to get a Hall of Fame award. That never occurred to me, as a matter of fact."

Kennedy said a deal has already been signed to make a movie about his book on the Ku Klux Klan, "The Klan Unmasked."

He told a story about a talk he gave in 1947 to an NAACP chapter in Texas. After he was done, a little African-American girl grabbed his leg and said, "I know what you do. You spy on mean white folks and then tell us what they're fixin' to do."

But Kennedy added that he would not recommend "Klan busting" for anyone else.

Peggy Bulger, director of the American Folklife Center of the Library of Congress in Washington, D.C., said she met Kennedy while she served as Florida's folk arts coordinator from 1975 to 1989. She later wrote her doctoral thesis on Kennedy's work called "Stetson Kennedy: Folklore and Activism," and worked with Kennedy and writer Tina Bucuvalas on a book called "South Florida Folklore."

"He couldn't go into the Army during World War II," Bulger said. "So he decided to fight fascism here at home. The Klan's charter said it was organized as a 'charitable, non-profit' organization, so Stetson used their own passwords, handshakes and secret symbols against them and had that charter withdrawn."

She said Kennedy had infiltrated the Klan chapter -- called a "klavern" -- at Stone Mountain, Ga., then fed muckraking Washington, D.C. journalist Drew Pearson everything he learned.

"It was getting really dangerous for him," Bulger said. "Then he testified before Congress, and he had to leave the country. The Klan was offering $1,000 a pound for him."

Kennedy went to Paris for a year, meeting famous writer Jean Paul Sartre, who published one of his books. Bulger said he spent a year living in a Paris police station, since he had nowhere else to go.

"He was in Budapest during the Hungarian Revolution (in 1956)," Bulger said. "And he wrote features about gypsies for Tass (the Soviet news agency). His folklore work is not just collecting songs. It's a very powerful movement. These stories are handed down by word of mouth and tradition. And he didn't stop at just collecting. He used everything for political change."

Kennedy's land on Lake Beluthahatchee was set on fire twice by the Klan, she said.

Joanelle Mulrain of Washington, D.C., now a consultant for the Stetson Kennedy Foundation, said she was struck by his courage and his love of nature.

"He's Florida's hidden treasure and an American icon, someone who has truly made a difference," she said. "He has literally worked his entire life to do so. That should be honored."

She said the foundation is still be organized. Some of Kennedy's papers will stay with the house on the lake, some are already at the University of South Florida, University of Georgia and the New York Public Library.

"He's going to leave a footprint, and he's dug it himself. They don't make cloth like Stetson Kennedy any more," Mulrain said.

Kennedy said his next, and continuing, battle is to save Florida's natural world.

"Man does not live by culture alone," he said. "Man-made Florida is threatening Mother Nature's Florida. There is an obligation for messages, so here's my message: Florida -- Love it or lose it."

"You can't embrace me without at the same time embracing fair play and equal opportunity," Kennedy said.

The Florida Artists Hall of Fame was established by the Florida Legislature in 1986.

There are more than 30 members of the Hall of Fame including some with St. Johns County ties. In addition to Kennedy, they are Earl Cunningham, folk artist; Martin Johnson Heade, artist; Gamble Rogers, musician and storyteller; Marjorie Kinnan Rawlings, author; Zora Neale Hurston, author, and Ray Charles, musician.

TALLAHASSEE, FL – On Wednesday, April 6, 2005, Secretary of State Glenda E. Hood will induct Stetson Kennedy, an author, rights advocate and folklorist, into the Florida Artists Hall of Fame.  The induction will take place at the R.A. Gray Building in Tallahassee during the Florida Heritage Month Gala.

“The remarkable vision and works of Stetson Kennedy demonstrate a powerful lifelong commitment to Florida’s rich heritage,” said Secretary Hood. “Stetson Kennedy has devoted his life towards creating a better world.  His literary and scholarly accomplishments are a credit to the state.”

Nominated by the Florida Center for the Book headquartered in Fort Lauderdale, Kennedy was recommended for the Hall of Fame honor from a slate of finalists by the Florida Arts Council.

A native of Jacksonville (b.1916), Kennedy attended Robert E. Lee High School in that city, and went on to further studies at the University of Florida, the New College for Social Research in New York, and at the Sorbonne in Paris.

At the University of Florida, Kennedy took a special course in creative writing taught by famed “Cross Creek” novelist Marjorie Kinnan Rawlings.  “I don’t remember it, but I’m sure it did me a lot of good,” he says.  Later Rawlings recommended him to Hollywood as an expert on Cracker dialect for the filming of her novel “The Yearling”—however, someone else already had the job.

Kennedy’s first book, “Palmetto Country,” a volume in the American Folkways Series edited by Erskine Caldwell, was published in 1942 when he was 25.  Of it, the folk musicologist Alan Lomax, said, “I very much doubt that a better book about Florida folklife will ever be written.”  For decades it was on the recommended reading lists of the Florida public school system.

In 1990, on Kennedy’s 75th birthday, the state historical societies of Florida, Georgia and Alabama held a joint meeting in St. Augustine to celebrate Palmetto Country’s 50th anniversary.  The University of Florida Press brought it back into print as a “Florida classic” in 1989.

However, it was Kennedy’s exposure of homegrown racist terrorist groups, such as the Ku Klux Klan, that lead to national and international recognition.

From 1937 to 1942 Kennedy served as state director of the WPA Writers Project folklore, oral history, and ethnic studies.  In that capacity he was nominally the boss of Zora Neale Hurston, an Afro-Floridian who later achieved world fame as a novelist and anthropologist.  The project “canned” thousands of Florida folksongs, tales, and legends, preserved for all time at the Library of Congress and State Archives in Tallahassee.

It was in the late 1940s that he took it upon himself to infiltrate, under the pseudonym “John Perkins,” the KKK and other terrorist groups.  Evidence he gathered was instrumental in jailing a number of terrorists, and also led to such additional books as The Klan Unmasked, Southern Exposure, and Jim Crow Guide.  Some of these were translated into a score of languages around the world.

Unable for years to find a publisher in the United States for his books attacking the KKK and Jim Crow racial segregation, Kennedy turned to the famous French philosopher Jean Paul Sarte, who published them under his imprint.  While living in Paris, Kennedy became the “best of friends” with self-exiled African-American author (Native Son, Black Boy, etc.) Richard Wright.

Kennedy’s most recent book, After Appomattox: How the South Won the War, was completed in 1998 with the help of his wife Joyce Ann.

Kennedy’s long affiliation with the Florida Historical Society began in 1937.  A founding member of the Florida Folklore Society and Oral Historian Association, he is a recipient of the Florida Folk Heritage Award, Florida Governor’s Heartland Award, an honorary doctorate from the University of North Florida,

Repositories for his papers include the New York Public Library’s Schomburg Center for the Study of Black Culture, Southern Labor History Archives at Georgia State University, and the University of South Florida.

Now 88, he is “racing the clock” at his rustic retreat, Beluthahatchee in St. Johns County, trying to complete his autobiography Dissident-at-Large, a formula for peaceful coexistence in the 21st century titled Hate No More, and a collection of Key West folklore, Grits & Grunts.

A Stetson Kennedy Foundation, chartered by the State of Florida and headquartered in Beluthahatchee, is dedicated to carrying on his legacy of struggle on behalf of “Fellow Man and Mother Earth.”

Beluthahatchee has been designated a Literary Landmark by Friends of the Library—USA, and a historic site marker has been approved by the St. Johns County Historic Resources Review Board.

Established by the Florida Legislature in 1986, the Florida Artists Hall of Fame recognizes persons, living or deceased, who have made significant contributions to the arts in Florida either as performing or practicing artists in individual disciplines. These individuals contribute to Florida's national or international reputation as a state with a strong and sustained commitment toward the development of cultural excellence. The Florida Artists Hall of Fame currently consists of over 30 inductees, including musician and performer Ray Charles, writers Zora Neale Hurston, Tennessee Williams and Ernest Hemingway, and visual artists Duane Hanson, Robert Rauschenberg and James Rosenquist.

For general information about the Florida Artists Hall of Fame, please visit www.florida-arts.org