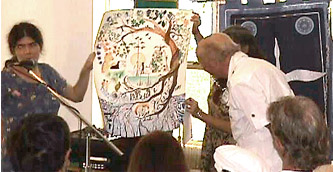 Stetson Kennedy celebrated his 85th year by being honored with the Dr. Benjamin Spock Peacemaker of the Year Award. The award was given to Kennedy by the non profit organization, The Florida Coalition for Peace & Justice.

Stetson accompanied by wife Joyce, son Loren, and grandson Sean, drove to the Coalition's site which is located in the deep back woods of South Florida. The remote location did not prevent several longtime friends, family, and colleagues from attending. Among those who made the trip included: Alan Lomax, MaVynee Beach, Ana Maria Vasquezz, along with family, fans and friends that came from all over the country to honor Stetson Kennedy.

At the ceremony, artist/activist Ana Maria Vasquezz surprised her friend Stetson by giving him an original painting dedicated to him and his life's work.

Upon accepting the Peacemaker of the Year Award, Kennedy gave a heartfelt talk on racial tolerance and social inequities to an attentive audience. He also participated in a Q&A as well as a book signing. Musicians performed songs honoring stetson including longtime friends Frank & Ann Thomas, who performed their original song, "Florida's Living Legend", which honors Stetson Kennedy and his legacy.