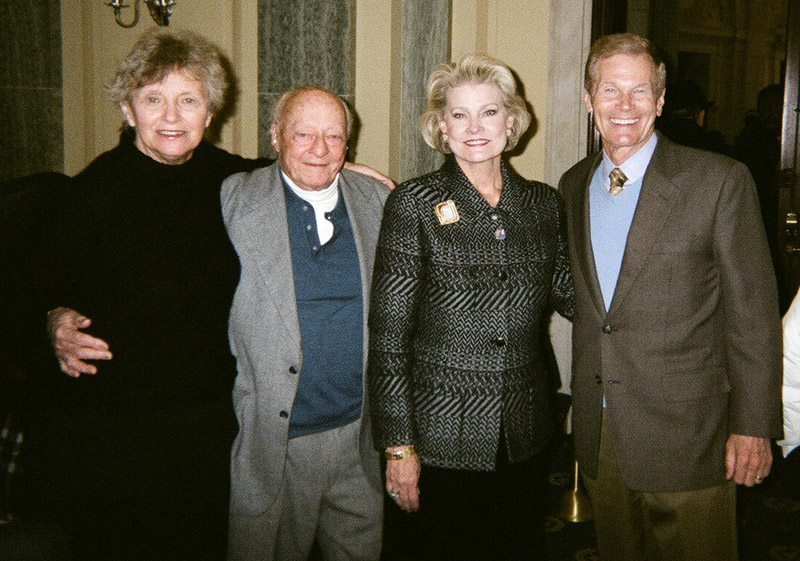 As the Washington, D.C. taxicab pulled up in front of the U.S. Congressional headquarters for the House Committee on Un-American Activities, Stetson Kennedy quietly donned the Ku Klux Klan robe he’d worn when infiltrating the terrorist organization. Firmly grasping his heavy, evidence-stuffed suitcase, the white-hooded young crusader jumped from the backseat of the cab and entered the building, determined to take a dramatic stand against the criminal activities of the Klan. Instead, just moments later, he was roughly escorted from the building by four armed security guards.

That was back in the 1940s. Fast forward almost six decades.

At age 92, Kennedy visited Washington, D.C. last week, this time at the invitation of Senator Bill Nelson of Florida and this time as an award-winning and highly respected advocate for peace, justice and equality.

Kennedy’s work with Zora Neale Hurston in the 1930s on the WPA’s Florida Writer’s Project, his infiltration of the Ku Klux Klan back in the 1940s, his run in 1950 for the U.S. Senate on a ticket of “Total Equality,” and his ongoing lifetime penchant for fiercely wielding the written word like a sword against injustice earned him induction into the Florida Artists Hall of Fame in 2005.

Kennedy’s St. Johns County home, Beluthahatchee, has been designated a literary landmark in tribute to his lifetime achievements and his books, among them “The Klan Unmasked,” “Southern Exposure,” and “Palmetto Country.” Beluthahatchee was also the place where his “stud buddy” Woody Guthrie wrote 80 songs and his autobiography, “Seeds of Man.” Now owned by St. Johns County, the historic home on State Road 13 is slated to be a Florida Heritage Park, with the Stetson Kennedy Foundation (www.stetsonkennedy.com) facilitating workshops and retreats for students, artists, activists and environmentalists.

The indomitable Kennedy has just published his seventh book, a Key West memoir titled “Grits & Grunts,” and is currently compiling a collection of his writings for a Kennedy Reader titled “Land Be Bright.”

On the Saturday prior to the inauguration, in an interview with Ira Glass of National Public Radio’s “This American Life,” the feisty old freedom fighter repeated a story he told recently at the Studs Terkel Commemoration Ceremony at Cooper Union in New York.

“A little old lady came up to me after I had spoken at a civil rights meeting in Connecticut in 1947,” Kennedy recalled. “She asked me, with a tear in her eye, ‘Was it all in vain?’”

At the time, Kennedy said, he didn’t know how to answer her regarding the effectiveness of a life spent signing petitions, writing letters, marching on picket lines and attending protest rallies. But, after seeing “the pouring out and coming together of the American people to put Obama in the White House,” he’s now got an answer.

When he and his wife, Sandra Parks, traveled from St. Augustine to Titusville for a speaking engagement, they got in touch with Evangeline Moore, the only surviving daughter of Harry T. and his wife, Harriette, who were dynamited to death in their home on Christmas night, 1951, as a direct result of Moore’s NAACP activities in registering thousands of black voters.

“My wife, Sandra, offered Evangeline her ticket to the inauguration,” said Kennedy. “Harry would have wanted her to be there.”

Although Evangeline Moore’s rheumatism would not permit her to accept the offer, she did tell Kennedy, “It has been more than half a century since my parents were assassinated, but it has taken the election of Obama to make me feel that they did not die in vain.”

No, it was not in vain, Kennedy agreed. The Kennedy’s watched the presidential inauguration on a big screen television at Nelson’s viewing reception held in the Russell Senate Office Building.

“Yes, I know I could have seen it at home,” admitted Kennedy, who walked more than 14 blocks in below freezing temperatures on inauguration day, despite dire warnings from his doctor to avoid getting chilled.

“I really did need to be there,” he explained. “I’ve been campaigning for President Obama since 1932.”